The History of Hannagan Meadow Lodge

Since Hannagan Meadow Lodge was established in 1926, it has had a rich history derived from both roadbuilding and cattle ranching in the Southwest. The development of the Lodge over time has been a labor of love for each and every subsequent owner, all of whom have been determined to maintain its history and charm. 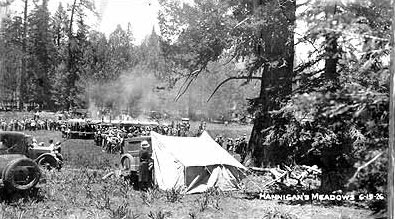 How Hannagan Meadow Got its Name

Hannagan Meadow is named after Robert Hannagan, a Nevada miner who came to the area in the late 1890's and subsequently engaged in cattle ranching around the Blue River area between Alpine and the current location of the Lodge. Through a business deal with two brothers ranching in the vicinity, he incurred an indebtedness of $1200, which he refused to pay. They subsequently stopped the stage on which Hannagan was riding and upon removing him, chained him to a tree. They sent word to his son James in Deming, New Mexico, that his father would only be released upon payment of the $1200. The son dispatched the money with all haste and secured the father's release. The Meadow across the highway from the Lodge was given his name after a coin toss with another area rancher, Toles Cosper. Had the coin flipped the other way, we might now be called Cosper Meadow Lodge!!

Hannagan Meadow is an Important Part of Coronado Trail History

A two-day celebration for the dedication of the Clifton-to-Springerville Highway was held at Hannagan Meadow on June 19, 1926. At the dedication, the Highway was referred to as "the trail of Coronado" after the Spanish explorer Francisco Vasquez del Coronado, who in 1540 searched for the fabled Seven Cities of Cibola. It is believed that Coronado and his expedition came through the Hannagan Area.

This auspicious occasion was attended by approximately 6,000 people (including 125 White Mountain Apache Indians) who made the long journey from Clifton in the south, or Springerville in the north, to camp in the Meadow and celebrate. Among the activities were a devil dance, rodeo, concert and addresses by many Arizona officials and dignitaries interested in highway development, including Governor W.P. Hunt, who stayed at a cabin on the site of the current Lodge during this weekend. Governor Hunt in his speech at the celebration gave Rt. 191 (then Rt. 666) the name "Coronado Trail" which has stayed with the road ever since. The Coronado Trail is one of only some thirty federal highways to be designated a "Scenic Federal Byway."

Also of interest to the revelers were dancing, religious services, side trips, and dedication of a monument cast and donated by Phelps Dodge Corporation in their Clifton smelter, and which can be viewed today just south of the Lodge. Most importantly, a free barbeque was offered for which "six fat steers and two bear have been barbequed for the occasion and the meat is expected to be sufficient for the crowd present. Shipments of bread, groceries, etc. were made to the grounds the day before," as reported in the newspaper The Arizona Republican. 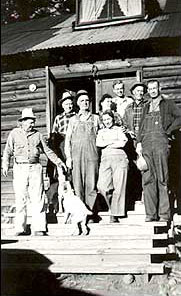 Development of Hannagan Meadow Lodge Through the Late 1900s

The first Forest Service permit for Hannagan Meadow Lodge was issued in 1926 to operate a store for the celebration, and then later for a service station, cabins and a restaurant. The main Lodge building itself was built shortly thereafter to provide lodging for travelers of this steep, winding, narrow dirt roadway that took more than two days to complete at that time, from Clifton to Springerville.

Major improvements have been made to the Lodge over the past 76 years, and although it has been completely renovated since its 1926 beginnings, care has been taken to preserve its rustic and homey feel. The majority of improvements, including the addition of the second and third floors, were added in the late 1950's by then-owner Guy McCafferty. All of the changes have been for the better, although some were the result of tragedy at the time. Both cabins 1 and 2 were destroyed by fire, and the original service station/general store burned to the ground as a result of a short in the fuse box, and had to be rebuilt. The restaurant has been in a few different arrangements, although it has always been in the same location in the main Lodge. The additional cabins were also added in the 1950's. Linda Thiel owned the Lodge from 1981-1996 and was passionate about the Lodge. Newly divorced, she paid off her home and bought the Lodge, bringing her five children with her. Her friend Jim Thudin became Lodge manager and handled business matters, woodcutting, maintenance and repairs, while Linda cooked, supervised the restaurant and helped with cabin cleanup. They had to sell the Lodge in 1996 due to Jim's poor health.

Numerous improvements were made to the Lodge during 1996 by previous owners who were winners of $3.7 million from the Arizona Lottery in May 1992. The water, sewer and electrical systems for the Lodge and cabins were expanded and improved, and every room given its own bathroom. Interiors throughout the complex were rejuvenated with new carpet, paint, tile, wood floors, and furnishings, including beautiful antiques in the Lodge rooms. Every cabin and room was given a unique feel and decor.

Mysteries of the Lodge

There are a few mysteries associated with Hannagan Meadow Lodge. For instance: are there ghosts in the Lodge? Some people believe so. One evening, with no guests staying at the Lodge, a former owner locked all the doors and turned off all lights before heading to the general store to do the same. After locking the store, he looked back at the Lodge to see a light shining through the second floor window. Cursing to himself, he suddenly saw a woman looking out from the window and rushed back into the Lodge to see what was going on. Upon entering, he found that the second-story light was no longer on, and realized that the window he saw the woman through was an upper window above the staircase, with no landing below it for anyone to stand on. The Lodge was still empty of people and all the doors were still locked. However, nobody else has ever reported ghostly contact in the Lodge.

John Wayne signature maybe hidden at Hannagan Meadow LodgeAnother question remains unanswered: Is John Wayne's signature on the wall behind the fireplace mantel in the sitting room? There are some old-timers in nearby Alpine who swear that it's true, and that they've seen it with their own two eyes. However, since that time a beautiful hand-carved mantel has been installed over the wall, and it cannot easily be removed to check, without ruining the mantel. Perhaps at some date much later in history, the mystery will be solved when that mantel is replaced. In the meantime, the question of John Wayne's signature lingers on.

The Future of Hannagan Meadow Lodge

We are committed to making our website ADA compliant. Read our accessibility statement